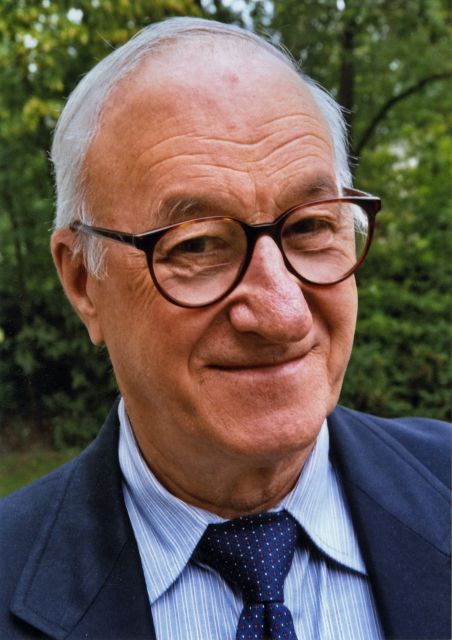 Professor Bandura is one of the most influential psychologists ever, and the most frequently cited living psychologist. His professional career spans sixty years this year. His research has given new insights into and understanding of the origins of children’s aggressive actions.  He classically demonstrated that children merely observing an aggressive action by an adult were likely to imitate that aggressive action later, thus giving evidence for learning solely by observation which was in sharp contrast to the then prevalent behaviorist view of learning solely by reward of one’s own actions.  That in turn provided a key foundation for the cognitive revolution in psychology and for his “social learning theory” that has influenced all of psychology since.  This theory undergirds the use of public television programs to model appropriate social behaviors for children and adults in several countries, and contains implicit warnings about the dangers of portraying violence in the media. Albert Bandura’s scientific contributions are among the very most important in all of psychology, translated into nearly a dozen languages, and have been applied in fields such as education, social skills, business, health promotion, and sports to the benefits of all humankind. His theory was applied worldwide to alleviate some of the most urgent global problems.

From the Commendations by the Jury

Albert Bandura began studying aggression in the 1950’s and suggested that while environment causes behavior, behavior also determines environment as well. He labeled this concept reciprocal determinism: The world and a person’s behavior cause each other. Later he added personality to form an interacting triad. Originally a behaviorist, he became known a one of the fathers of the cognitivist transformation of psychology. Of the hundreds of studies Bandura was responsible for, one group stands out above the others — the classic bobo doll studies.  In an example of these simple but elegantly designed studies, he showed children a  film of a young woman striking a bottom weighted self-righting balloon creature with her fists; children observing this film were later more likely to behave aggressively.  This line of work on observational learning directly challenged the reigning theory of the time; behaviorism.

According to behaviorism, parental punishment would lead to less aggression among children, but Bandura’s research suggested the opposite and gave evidence for observational learning from a model. That in turn provided the foundations for his influential ‘social learning theory’ and later ‘social cognitive theory’ that has influenced all of psychology since. He has even used this film strategy to model appropriate social behaviors on television programs. He also developed modeling therapy techniques and self-control therapy techniques based on new concepts of self-efficacy and its contributions to resilience in the face of adversity.

Bandura’s scientific contributions are among the very most important in all of psychology and have been applied in fields such as education, promotion of social skills, business, health promotion, and sports.  Albert Bandura is the 4th most cited psychologist in all of psychology (with Freud, Skinner, and Piaget). Additionally his books are most widely cited in the humanities.

Bandura was born December 1925 of Ukranian and Polish descent in the small town of Mundare, Alberta, Canada, the youngest child in a large family.  Upon completion of high school there, he went on to the University of British Columbia, (BA, 1949), and the University of Iowa, a hotbed of behaviorism, completing his Ph.D. in 1952.  Bandura has spent virtually his whole career at Stanford University, save for a year as a Fellow of the  Center for Advanced Study in the Behavioral Sciences (1969-70), and a term as Sir Walter Scott Distinguished Visiting Professor, University of New South Wales, Australia, in 1988.  Albert Bandura is a giant in the field of psychology.  Author of more than 200 scholarly publications and books  spanning six decades from his first report  (“Primary” and secondary suggestibility”  in Journal of Abnormal and Social Psychology, Vol 48(3), Jul 1953, 336-340), to his latest this year (“On the functional properties of perceived self-efficacy revisited ”,  in the  Journal of Management, Vol 38(1), Jan 2012, 9-44).

Among the living psychologists, few if any surpass Professor Albert Bandura in their impact on the whole field.  His researches initially focused on the origins of aggression and later self-regulation; these researches led him to propose two major theories, the social learning theory and the self-efficacy theory, that have been central to many subdisciplines of psychology (social, developmental, clinical, and school psychology, etc.) and to applications in numerous fields.  According to one survey (Haggbloom, 2002), Bandura is the most-cited living psychologist (and the fourth most-cited among all psychologists after Sigmund Freud, B. F. Skinner, and Jean Piaget).

Albert Bandura has not only contributed to the field as a scholar but also as an organizational leader having served on the Board of Directors of the American Psychological Association (1972-76) and as its President (1974), the US. National Committee for International Union of Psychological Science (1985-93), and the Committee on International Affairs of the Society for Research in Child Development (1991-1995).  He also served and currently continues to serve on the editorial boards of dozens of journals.

Albert Bandura’s research and theorizing has significantly shaped the landscape of psychology and will continue to do so in the foreseeable future. He is the most deserving psychologist of the prestigious Lifetime Career Award of the International Union of Psychological Science.  Albert Bandura is currently the David Starr Jordan Professor (Emeritus) of Social Science in Psychology at Stanford University.