Home > Who We Are > Awards > President’s Overview

Psychology can make this world a better place: How psychological approaches pay off in terms of human, social and financial capital 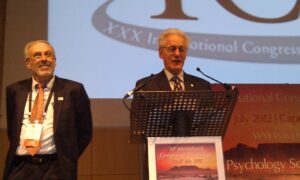 Psychology can make this world a better place. This is one of the conclusions out of five days of meetings, talks, presentations and discussions of around six thousand participants at the International Congress of Psychology (ICP) 2012 in Cape Town South Africa. “To meet the challenges of the changes we are witnessing across the world, be it due to scientific advances, or financial catastrophes, to political transformation, or climate change and ecological fragility, we have to come together more than ever before.” said Rainer K. Silbereisen, outgoing President of the International Union of Psychological Science IUPsyS.” We have to pool our knowledge and expertise, and we have to learn from one another – we have to recognize the contribution all areas of the world can make, and understand the importance of diversity.”

The success of molecular genetics and neuroscience on one hand, and socio-ecological approaches to human behavior and development on the other, led to a breakthrough to a better understanding of how the interchange between all levels of biological mechanisms and ecological contexts influences human behavior and development, and also provides crucial insights on the effects of social change on the well being of individuals and groups.

Dr Cooper accepting the Achievement Against the Odds Award

“Psychologists, however, not only set out to describe, predict, and explain normative and deviant behaviour; we also undertake ways to modify and optimize it,” said Silbereisen. “Here, new approaches have been developed that evaluate findings of carefully planned interventions, not only in terms of statistical significance, but also to provide evidence on how psychological approaches pay off in terms of human, social, and financial capital, and thereby achieve gains for society as a whole – in other words, ‘prevention is better than cure’, financially and socially, and psychology can help in this,” underlined Rainer K. Silbereisen on the last day of the ICP 2012 in Cape Town.

Albert Bandura, one of the most renowned scientists in psychology ever, was honored at the ICP 2012 for his lifetime achievement. He underlines Silbereisen´s conclusions: “Social modeling has become a major vehicle for large-scale social and political change,” he said.“ There is much utopian talk about the democratizing power of the social media. Dislodging despotic rulers liberates oppressed factions who view for power in the governance vacuum. Initial euphoria, usually gives rise to disillusionment over the nature of controversial changes in the aftermath and the slow pace of change”, Bandura describes one aspect of the major issues. ”What is lacking, are pro-social models on how to meld diverse self-interest into common cause, for humane, representative governance.”

“The presentations and discussions here in Cape Town are the fertilizer and catalysts for better and more relevant basic, applied, and translational research, and for the professional applications of psychology – all working towards improving, developing and enriching society for everyone”, said Rainer K. Silbereisen in his concluding remarks. “Psychology is serving the humanity.”

Dr Sathasivan Cooper, previously Vice Chancellor and Principal of the University of Durban-Westville, will succeed Prof. Rainer K. Silbereisen as President of the International Union of Psychology (IUPsyS).