Home > Who We Are > News > In Memoriam: A Tribute to Prof. Houcan Zhang

In Memoriam: A Tribute to Prof. Houcan Zhang and her Service to the International Union of Psychological Science

The international psychological community mourns the death of Prof. Houcan Zhang, a most respected figure of our discipline, and a contributor to the increased presence and visibility of Chinese psychology on the international scene. The members of the International Union of Psychological Science (IUPsyS) are particularly sad in these circumstances and feel committed to praise the contributions that our distinguished colleague made to the development of psychology as a science and as a profession.

An expert in psychometrics, testing, and statistics, and a promoter of the application of quantitative methods to psychology and education, Prof. Zhang also developed an ambitious research program on the cognitive mechanisms involved in the processing of Chinese language, particularly the reading and comprehension of Chinese characters. She investigated children’s eye movements that subserve reading, both those reflecting universal factors and those specific to the Chinese writing system. She also documented the positive effects of the Chinese tradition of putting emphasis on early education, especially children’s learning of mathematics.

Prof. Zhang conducted most of her research at Beijing Normal University, which she joined in 1952 and where she has been a source of inspiration for generations of students. The fact that she was invited to hold the position of Vice-President of the Chinese Psychological Society was a recognition of her exceptional academic qualification.

Prof. Zhang’s contribution to the missions of the IUPsyS took several forms. In 1995, the Executive Committee (EC) of the Union held a meeting in Guangzhou, China, in conjunction with the IUPsyS-sponsored Regional Asian-Pacific Congress. Prof. Qicheng Jing and Prof. Zhang welcomed the event. This meeting confirmed the high standards of Chinese psychology and entertained the idea of the value of inviting China to take over the organization of a forthcoming edition of the International Congress of Psychology (ICP).

In 1996, at the beginning of Prof. Géry d’Ydewalle’s presidency, Prof. Zhang was elected as an EC member. Her election ensured continuity with the previous mandate of Prof. Jing, and she served on the EC until the Stockholm Congress. In 2000, at the beginning of my presidential mandate, she was re-elected and took the important charge of Vice-President, which worked until the Berlin Congress. Her thoughtful initiatives, her wisdom, her sense of human relations were essential to the success of the XXVIIIth ICP, which was held in Beijing in 2004.

As a well-deserved recognition of the merits of Prof. Zhang, the IUPsyS decided in 2016 to deliver to her the Achievement against the Odds Award. Every four years, this prize honours a researcher who succeeded in conducting research under extremely difficult circumstances. Like many other academics, Prof. Zhang has suffered from coercive treatments applied at the time of the Cultural Revolution. Imprisoned for several years and subjected to so-called “reeducation”, she survived and courageously persevered against the regime that attacked psychology and criticized it as a pseudoscience. She took the lead to ensure the recovery of psychometric methods in the field of science and the recognition of psychology as an academic discipline.

As aptly stated by the IUPsyS when delivering this award, “Prof. Zhang has overcome many challenges to inspire multiple generations of students and scholars in China and become an ambassador of Chinese psychology to the world”. Today, the international psychological community pays tribute to the accomplishments of an outstanding pioneer of psychology in China and across the world. 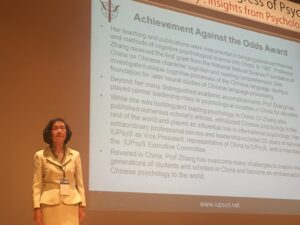