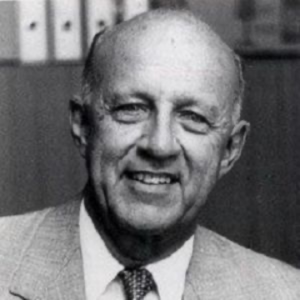 Wayne was born in Chicago on 16 January 1923. After receiving a BS degree in Chemistry from Northwestern University, he was commissioned as an Ensign in the U.S. Navy in February 1944. He then served on the USS Iowa during the latter part of the Second World War as an anti-aircraft gunnery officer. His observations of people in life threatening combat conditions and often debilitating stress during these difficult times prompted a particular interest in the complexities of human behaviour that greatly influenced his future career.

After being discharged from active military duty, Wayne decided to pursue doctoral studies in psychology at Stanford University. After completing a Ph.D. in Psychology and Statistics, he joined the faculty of the Psychology Department of the University of Texas in 1949 and retired in 1993; he was then appointed Hogg Professor Emeritus of Psychology and Education.

As a clinical research psychologist, his major contribution to the field of personality assessment was the creation, in 1961, of the Holtzman Inkblot Test (HIT), a projective personality test similar to the well-known Rorschach Inkblot Test. However, unlike the Rorschach test, the HIT was conceived as a standardised instrument with clearly defined objective scoring criteria. Indeed, it was created to address most of the controversial scoring and interpretation issues, as well as the shortcomings, surrounding the Rorschach Test. During his long tenure at the University of Texas at Austin, Wayne Holtzman held various administrative and professional positions including service as President of the Hogg Foundation for Mental Health and Dean of the College of Education. In an era when these areas were still in the early stages of development, Wayne was also Chair of the university’s Faculty Computer Committee as well as Chair of the Laboratory for Computer-Assisted Instruction.

During his distinguished career, Wayne Holtzman held many leadership positions within the realm of organised psychology, nationally and internationally. He served as President of the Texas Psychological Association, as President of the Interamerican Society of Psychology, and as Secretary-General (1972-1984) and President (1984-1988) of the International Union of Psychological Science. He was also Chair of the Board of Directors of the renowned Menninger Clinic and a Trustee of the Menninger Foundation. His reputation as an outstanding clinical and research psychologist was also recognised by his appointment as Director of the World Health Organization’s Texas-Mexico Collaborating Center in Mental Health. During his career, Wayne Holtzman authored over 200 articles in scientific journals and he served as Editor of the Journal of Educational Psychology. For his distinguished contributions to the fields of psychology and education, Wayne Holtzman received numerous honours and awards, including the prestigious Centennial Award from the American Psychological Association.

During his twelve years tenure as Secretary-General of IUPsyS and his four presidential years, Wayne Holtzman can be credited with many important achievements. For example, he efficiently promoted the globalisation of psychological science much beyond the borders of the traditional European and North American countries. He was particularly active in reaching out to Asian, African and Latin American countries. His goal was not only to make IUPsyS more inclusive; he also sought to expand psychological knowledge through mutually beneficial collaborative research.

Wayne Holtzman was instrumental in enhancing Union collaboration with international organisations, especially with the World Health Organization (WHO) and UNESCO, as well as with the two umbrella science organisations, the International Social Science Council (ISSC) and the International Council for Science (ICSU). With Dr. Norman Sartorius, a psychiatrist acting as Director of Mental Health at WHO, Wayne spearheaded an important project reviewing and establishing the roles and functions of psychologists in the provision of mental health care services. Wayne also provided vital leadership in promoting the adoption and enforcement of ethical standards and codes of conduct in psychology by the Union’s National Members. At the end of his first term as Secretary-General, the Union’s 1976 Assembly adopted resolutions dealing with the misuse of psychiatric diagnosis to suppress political dissent and the need to denounce vigorously all practices that are contrary to the values that must regulate the scientific and professional roles assumed by psychologists in modern society.

Wayne Holtzman will be remembered by all his colleagues, and especially those with whom he worked closely within the IUPsyS, as a brilliant colleague and highly efficient administrator whose manner was always very respectful and diplomatic. Wayne’s natural manner resembled that of a classic gentleman with a marvelous sense of humour. At the turn of the millennium, I had the occasion to co-author with him (as well as with Mark Rosenzweig and David Bélanger) a book on the History of the International Union of Psychological Science. Many memorable interactions resulted from this joint enterprise; Wayne’s participation definitely made it a most enjoyable learning experience. Wayne Holtzman will always remain very high in my personal pantheon of great psychologists and friends.