Professor Dato’ Mahmood, former President of the Malaysian Psychology Association and one of the founding Charter Presidents for ARUPS (the ASEAN Regional Union of Psychology Societies), passed away at 5.00 am, on 03 January 2019, at the age of 58 after a year-long battle with blood cancer. A loving husband and a devoted father, he is survived by his wife, Professor Sabitha, who is an academic at University Malaya, and two beautiful daughters – Sabrina and Farah.

After obtaining his Masters degree in Clinical Psychology from Duquesne University, Pittsburg, Pennsylvania, Mahmood was appointed as a lecturer in 1987 at the age of 27. He was a rising star and promoted to Deputy Dean a year later and then as Dean at the age of 29. In 1995, Mahmood obtained his Ph.D in Psychology from the National University of Malaysia. Later, he served as Director of Research and Consultancy and Deputy Vice Chancellor at the University Utara Malaysia (UUM).

His research in the area of substance abuse reframed the national debate on addiction interventions in Malaysia and was instrumental in Mahmood being appointed the Deputy Director General for the Malaysian Anti-Drug Agency (MADA). He also served as the President of the Malaysian Substance Abuse Council (MASAC). After leaving MADA, Mahmood returned to academia as Deputy President of a new private university in Malaysia, establishing the psychology program and setting up a Post-Graduate Diploma in Addiction Science (PGDAS) with funding from the Colombo Plan.

Mahmood played an instrumental role in the development of Psychology in this country over the last 20 years. As the fourth President of the Malaysian Psychological Association (PSIMA) he diligently helped to draft the Psychology Act which is now in its final form and consistently encouraged the discipline to be outward looking and progressive. He was also one of the founding members of ARUPS (The ASEAN Regional Union of Psychological Science) in 2003, serving as a Charter President representing Malaysia at the first ARUPS Council.

Mahmood leaves a legacy that will continue to have an impact in this country and this region. Many of his former students, colleagues and friends were devastated about his demise – he had touched their lives and hearts in many different ways. May Allah bless his soul and may he be placed among the righteous in heaven. 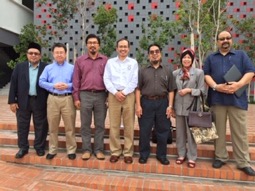 2017: Seven past and present PSIMA Presidents with Professor Mahmood on the extreme right