Home > Who We Are > News > The Klaus J. Jacobs Research Prize 2014 Awarded to the Canadian Geneticist Michael J. Meaney.

The Klaus J. Jacobs Research Prize 2014 was awarded to the Canadian geneticist Michael J. Meaney. He has shown how (negative) experiences with the immediate environment in early life exert an influence on human development via “methylation” of the genome – a rather stable but malleable change of the “readability” of particular DNA segments without changing the DNA itself, that are related to the formation of the stress response system and other circuitry in body and mind. Such effects then further influence other developmental trajectories, including cognitive and social development. These “epigenetic” effects themselves are moderated by the genome – depending on the genotype environmental influences may differ. The Klaus J. Jacobs Research Prize provides the recipient with the equivalent of over 1 million USD for innovative research on child and youth development. Past President Rainer K. Silbereisen has been a member of the international Prize Jury for 6 years. For further information on the Prize and the Awardee see: http://jacobsfoundation.org/awards/2014-research-prize 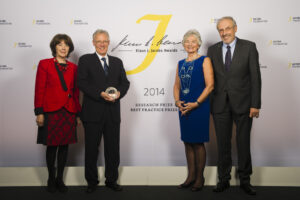